How to make knobs or drawer pulls

When renovating a kitchen or bathroom, the cost of changing out the knobs can add up very quickly. The same goes when sprucing up a dresser with new drawer pulls. So I experimented with a couple of different inexpensive ways to make my own, and turns out it’s pretty easy to do!

For these knobs, I ended up buying river stones from the dollar store – I live in LA and though there are beaches nearby, finding stones that are smooth and the right size proved to be too challenging! 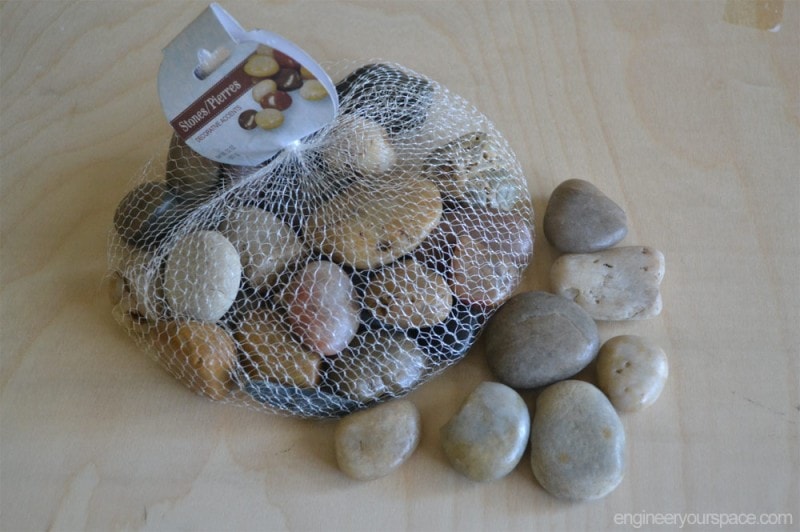 To turn the stones into knobs, all you need are these nifty things called connector caps (or barrel nuts) and bolts.

You can get connector caps in different finishes, like the bronze ones in the picture and you can get bronze bolts to match but since you don’t see them, I went with regular ones to save some money. If you do this, you just want to make sure that the bolt and connector have the same thread size and to stick with either metric or imperial (mixing the two won’t work). The length of bolts you will need depends on the thickness of the drawer face. In most cases, 25mm (1”)  long bolts should work well.

I found these silver colored Barrel Nuts and bolt sets on amazon.com (20 for about $5) – they work great as well but the only thing is that the bolts are a bit too short (20mm instead of 25 mm), so I bought longer bolts (I had to get metric because the barrel nuts are metric) to make them work.

Whether you use the connector caps or barrel nuts, the steps are the same. The first thing I did was find rocks that have a flat side and I sanded it down to remove any residue and have a better surface for the glue to grip. I cleaned off any dust and also cleaned the connector caps. 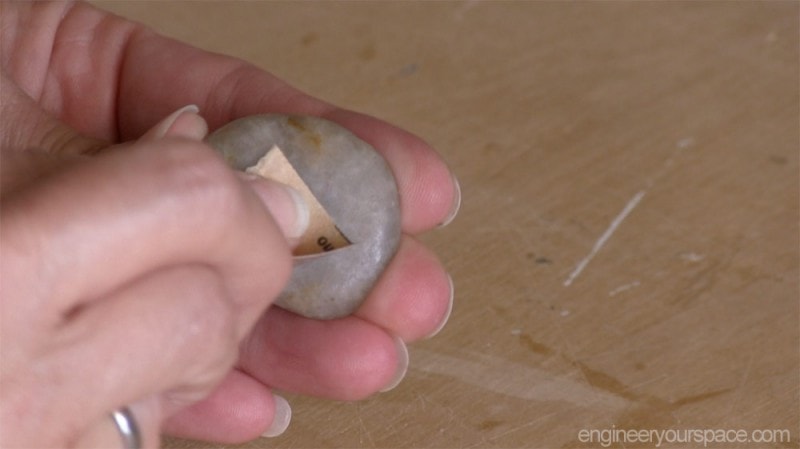 I mixed epoxy glue, and dipped the top of cap to cover it with glue and then placed it at the center of the stone. 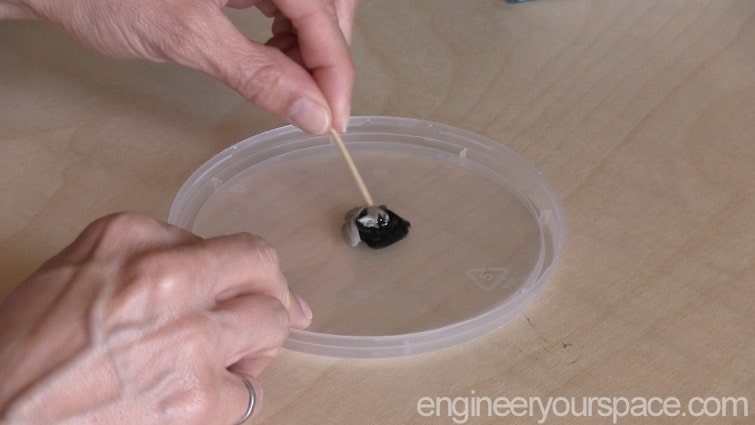 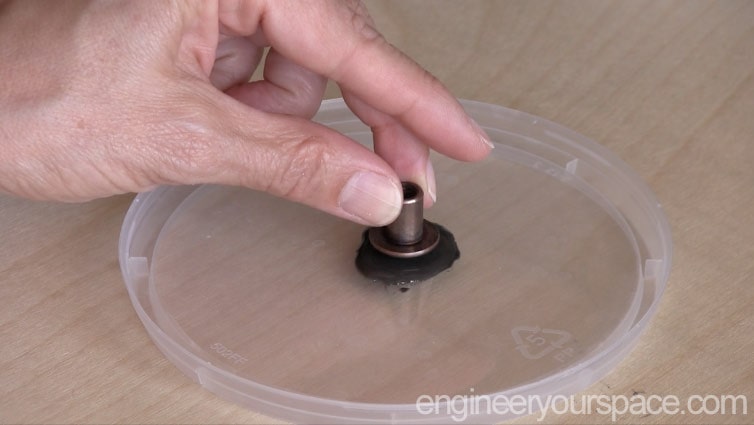 I placed the knobs on a bed of gravel (I had that from another project – it’s actually for aquariums!) so they could be flat during the drying process. You could also use sand for this. 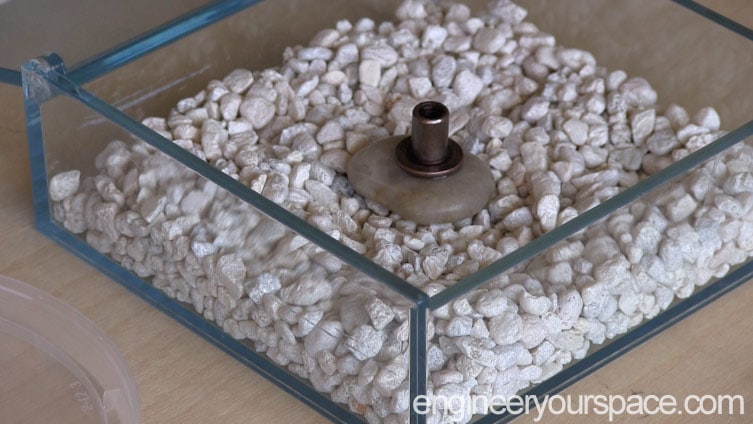 Then it was just a matter of using the bolts to secure them to the drawers. 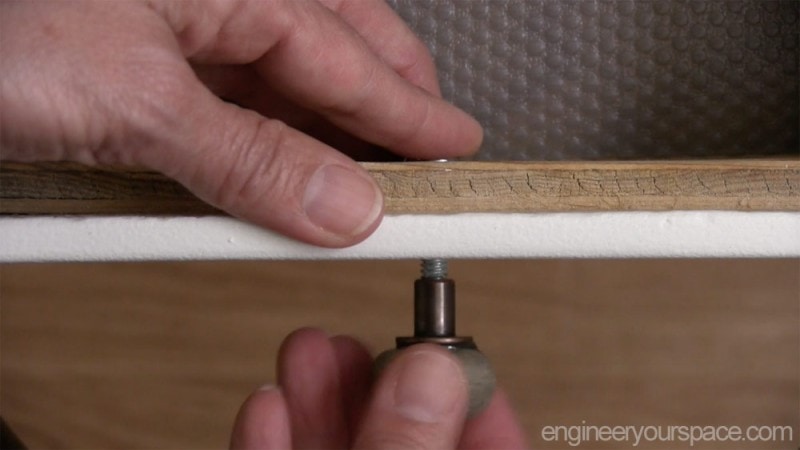 And that’s it – my bathroom vanity got a whole new look thanks to these stone knobs. 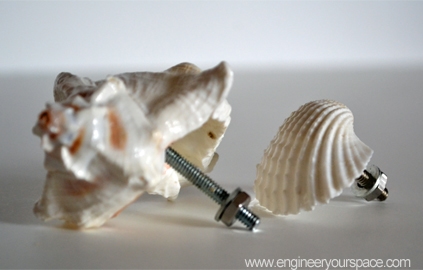 For these drawer pulls, I used shells from the Dollar Store (same issue as with the stones), nuts & washers, bolts (about 1 to 1.5 inches longer than the thickness of the shell), scrap rigid cardboard, rubber bands and epoxy glue.

The first thing I did was cut a piece of rigid cardboard so that it’s the width of the shell and extends past it by about an inch, and made a hole in the middle. It will act as the flat surface of the dresser drawer to set the bolt in place. 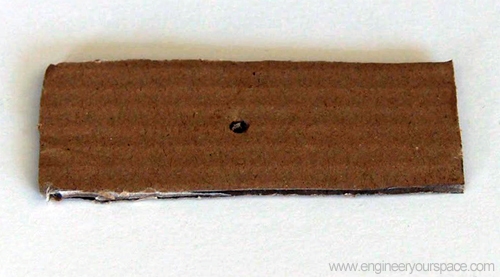 Next I inserted the bolt in the hole of the cardboard

I poured epoxy glue into the shell cavity (I used the type that mixes together as it’s poured), making sure to mix the glue with a tooth pick and that there’s enough glue to cover the head of the bolt. 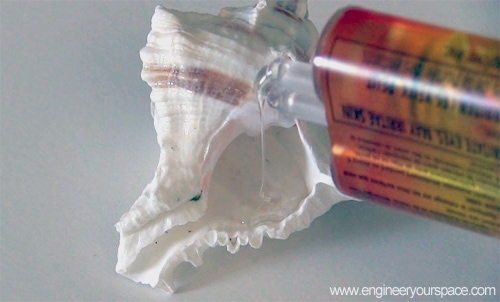 I placed the head of the bolt so that it touches the bottom of the shell cavity, while making sure the cardboard is flush to the back of the shell. Then I moved the bolt around so it is perpendicular to the cardboard. 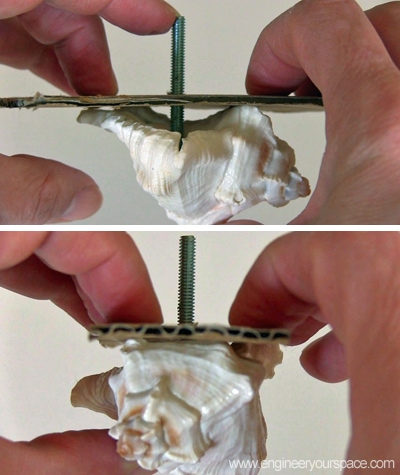 When the bolt is placed properly, I used a rubber band to secure the cardboard in place, double checked that the bolt is still touching the bottom of the shell cavity and still straight (it doesn’t have to be perfect but the straighter the better), then I placed the cardboard on the edge of 2 glasses. You could also place the shells in sand like I did for the stone knobs. This allowed the epoxy to settle on the bottom and cover the head of the bolt. 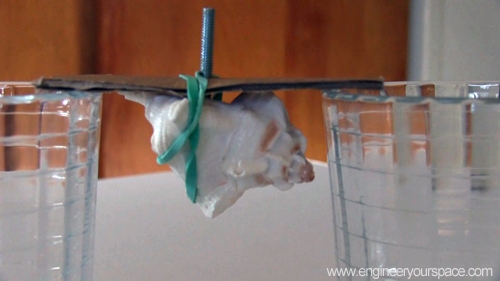 Another way to make these knobs is to use oven bake clay (I used Sculpey) and barrel nut and bolts like I used for the stone knobs. I filled the cavity of the shell with the clay, pressed the barrel nut head into the clay to make an imprint, making sure the bolt sits straight, and then baked the shell in the oven as per the manufacturer specs (I baked mine for about an hour @ 275 degrees F). Then I used epoxy to glue the barrel nut to the shell. 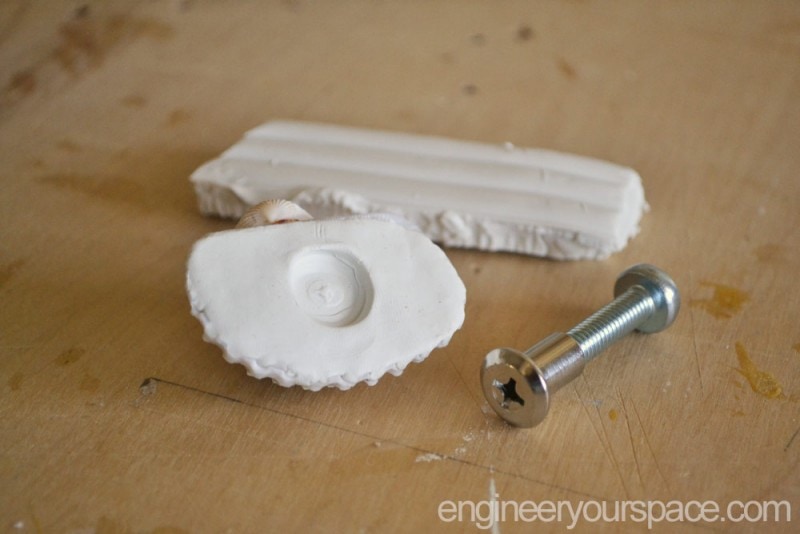 For either option, I let the epoxy harden and voila, beautiful shell knobs ready to give a new look to a dresser or a cabinet! 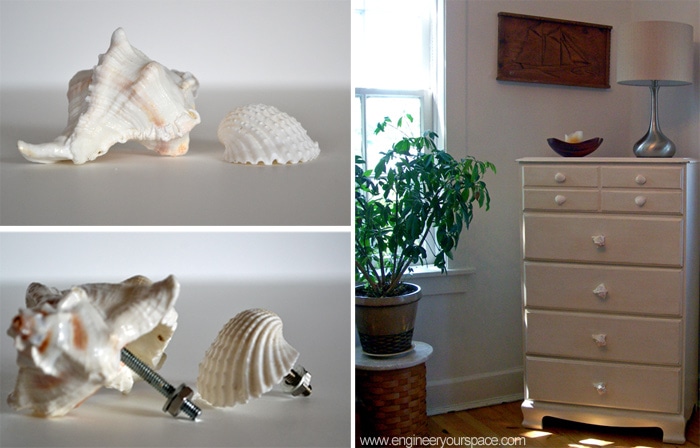 You can use these ideas to make knobs out of just about anything, all you need is a little imagination – I hope you’ll share what ideas you come up with!

This site uses Akismet to reduce spam. Learn how your comment data is processed.

Want more inspiration delivered to your inbox? Subscribe to my free newsletter! 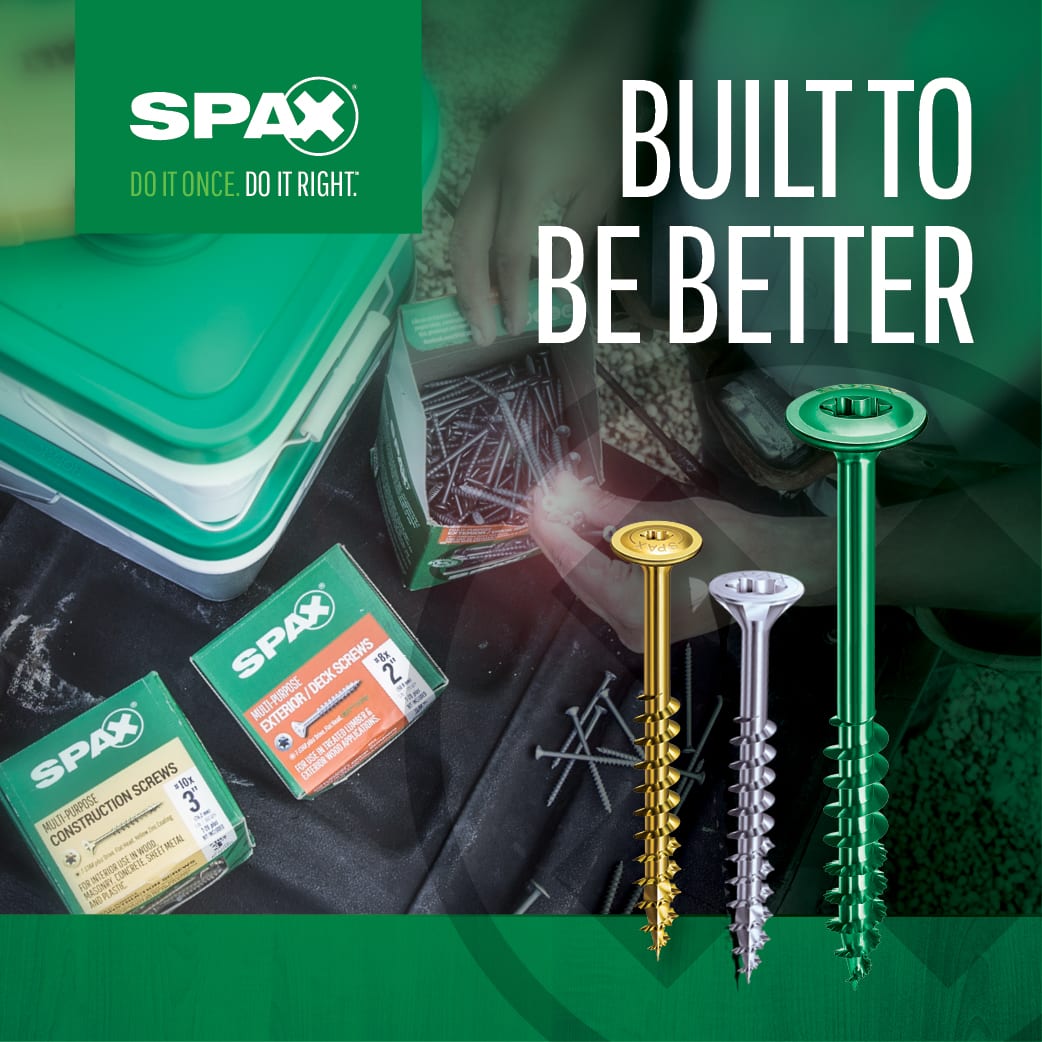 There were a lot of DIY and MacGyver hacks to maxi

That feeling you get when everything starts to com

My most extreme makeover yet and most creative use

How is it possible to be so darn cute? Love you my

My all time favorite DIY projects all in one place

The most precious gift DIYing has given me is the 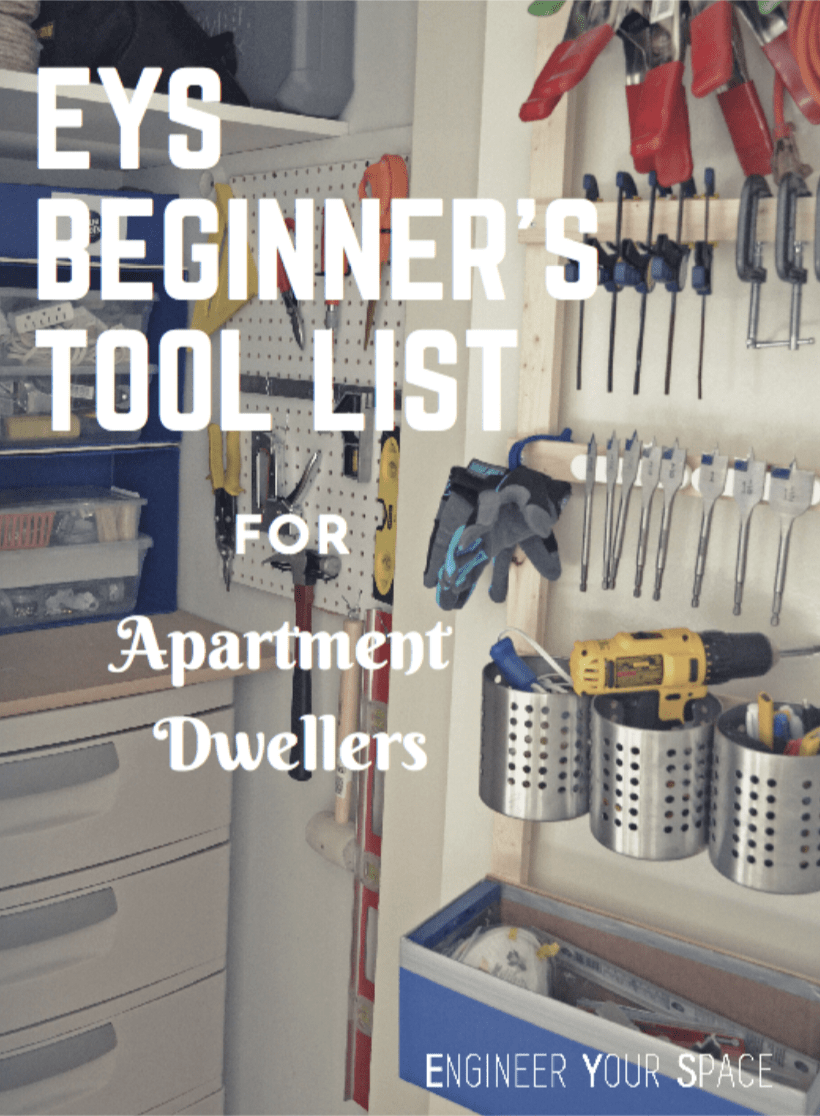 New to DIY? Get Isabelle’s curated tool list for beginner’s